I want to share a statement by Arthur Ashe and the difference it made in my life. Before that let me introduce you to Arthur Ashe, just in case, you have not heard about him

It was the year 1975,  first week (5th day ?) in the month of July I was with my friends in a restaurant in Rourkela. We carried a transistor radio with us,  ‘no TV’ days, to listen to a commentary of a tennis match, Wimbledon finals between the odds on favourite Jimmy Connors (betting is as old as the Mahabharath, and is still on, IPL6)  and Arthur Ashe. We were not involved in any betting , I don’t want anybody to come knocking on my door. Jimmy Connors plundered his way to the finals with out losing a single set. He lost only 3 sets in the tournament and that was in the finals to Arthur Ashe. He did not allow Connors to play any of his famous strokes like double handed backhand and powerful service returns. Arthur Ashe, was the first coloured American to win Wimbledon and we were an ear witness to a great event.

In addition to being a great athlete, Arthur Ashe also excelled in academics. Throughout his life he received honorary doctorates from numerous highly respected colleges including Princeton University, Trinity University, Hartford College and Virginia Union University. Arthur Ashe obtained high academic standards for people to follow. His hard work in school made him a role model for others and many schools of high academic achievement have been named in his honor.

The US Open and Wimbledon were two of the most acknowledged tennis accomplishments. In addition to those, he also won singles and doubles in Australian Open in 1970 and Winner, French Open in 1971.

Arthur Ashe, was dying of AIDS infected from an infected blood transfusion for a heart surgery in 1983. From world over, he received letters from his fans, one of which conveyed:
“Why does GOD have to select you for such a bad disease?”
His reply
50,000,000 children start to play tennis,
5,000,000 learn to play tennis,
500,000 learn professional tennis,
50,000 come to the circuit,
5000 reach the grand slam,
50 reach Wimbledon,
4 to semi final,
2 to the finals.
When I was holding a cup, I never asked GOD “Why me?”
And today in pain I should not be asking GOD “Why me?” 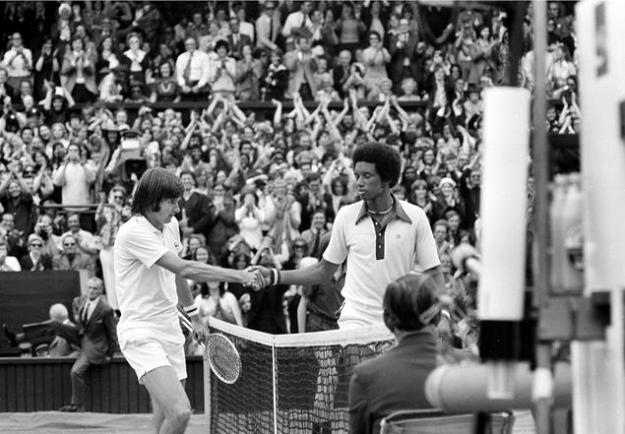 Arthur Ashe  public awareness to the subject of AIDS after he had been diagnosed with the disease. Arthur Ashe died at the young age of 49, because of this disease.

For me his ‘Why me” has been a life changing question which I will never ask. Life is full of situations to be dealt with, to be responded, no reason to ask why me. Since I do not ask why the blessings, I do not blame anybody for anything. Life has been easy for me after that.

What could or should have been has no meaning, the reality is “what is”. Accept the situation. Now you have an option, ignore it or respond. Everything happens for good. Everything in life is temporary. So when things are going good, enjoy it and if things aren’t good enough don’t worry, even that will pass.